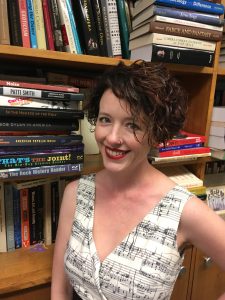 Marcie Ray is an Associate Professor of Musicology at the Michigan State University College of Music. She holds degrees from the University of Texas (B.M. in vocal performance) and the University of California, Los Angeles (M.A. and Ph.D.), where she was a Chancellor’s Fellow. Her monograph Coquettes, Wives, and Widows: Gender Politics in French Baroque Opera and Theater (Boydell & Brewer) was published in 2020, supported by MSU’s HARP production grant and the James R. Anthony Fund from the American Musicological Society. It illustrates how composers and librettists transformed and diminished early feminist literary characters when they adapted them for the French Baroque stage. Her other work can be found in Early Music, American Music, Music by Women, Engaging Students: Essays in Music Pedagogy, and Música em Perspectiva. She has won several grants and awards for her teaching including a Lilly Teaching Fellowship (2014-15), a Creating Inclusive Excellence Grant, the Dortha J. and John D. Withrow Excellence in Teaching Award, the Fintz Award for Teaching Excellence in the Arts and Humanities, and IAH Award for Excellence in the Mentorship of Graduate Assistants.