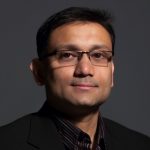 Amol Pavangadkar is a Professor of Practice and a Senior Specialist in the School of Journalism. As a Filmmaker and content producer, he has produced and directed dozens of media projects, with international collaborators and federal agencies. His productions range from promotional, training, music videos and films, delivered on a broad range of platforms. Some recent projects include race and the pandemic, parenting resources, a web based violence reduction assessment tool, trauma response training, human trafficking awareness, PTSD training for law enforcement agencies, program on police consolidation and shared services, food systems innovations in Africa and India, improving nutrition habits in low income families, and climate change communication.

He is a 2012 recipient of the prestigious faculty seminar fellowship from the Academy of Television Arts and Sciences, the 2016 Faculty Impact award at Michigan State University, the inaugural iTeachMSU teaching award in 2019 and the coveted Balgandharva Puraskar for outstanding contributions to theatre, film, media arts and community in India. He has presented and led training workshops at national and international conferences, including the Society of Environmental journalist conferences, World Trauma Conference, and his work has been supported by the National Science Foundation, National Institute of Health, US Department of Justice, USAID, State of Michigan, Homeland Security Investigations, National Intellectual Property Rights Coordination Center, Michigan Health Endowment and various foundations.

In addition to teaching film making and media management courses, he mentors student productions and portfolios and is an active contributor to WKAR-TV. Amol also designed and leads the first film production based study abroad program to India in the summer. His roots are in Bollywood, India’s prolific film and television industry, where he has credits in producing, directing and audio. More recently, he has been active in setting up MSU’s partnerships and branding in India.