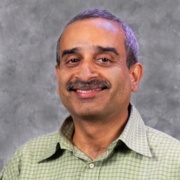 Nara Parameswaran is a Professor of Physiology and Associate Dean for faculty affairs and staff administration in the College of Human Medicine. Dr. Parameswaran received his BVSc. (Vet Med) from Madras Veterinary College, India, MS degree in Vet Physiology and Pharmacology from The Ohio State University, Columbus, and a PhD in Physiology from Michigan State University. His postdoctoral work was at Thomas Jefferson University in Philadelphia. Dr. Parameswaran has established an internationally recognized research program at MSU focusing mainly on understanding the cellular and biochemical mechanisms underlying inflammatory diseases, as well as identifying potential therapeutic strategies. His research program has received continuous funding through primarily NIH and has resulted in over 90 peer-reviewed publications and book chapters. He has also co-edited 2 books. He serves as an associate editor, review editor, and reviewer for several journals. Dr. Parameswaran also serves on several national and international grant review panels. He has won numerous awards and honors, including CHM distinguished faculty award as well as an appointment as an adjunct Professor at Sungkyunkwan University in South Korea. Dr. Parameswaran’s classroom instruction spans across several colleges. He consistently receives outstanding feedback from students for his teaching abilities. In addition to classroom teaching, Dr. Parameswaran has mentored, and continues to mentor, many undergraduate, graduate and professional students. He has served as the primary mentor for several MS and PhD students and has served on more than 30 thesis committees while at MSU. His lab has hosted more than 40 undergraduate researchers as well as high school students. These students have received ~ 25 awards, including research grants. Students trained in Dr. Parameswaran’s lab have gone on to achieve successful careers as faculty members and physicians, received competitive post-doctoral positions, and have been accepted into reputable medical schools and graduate programs.

Prior to his leadership role in the college, he served as an Associate Chair for the Department of Physiology as well as the Director of undergraduate studies.

Read about the ALP program and other current fellows.