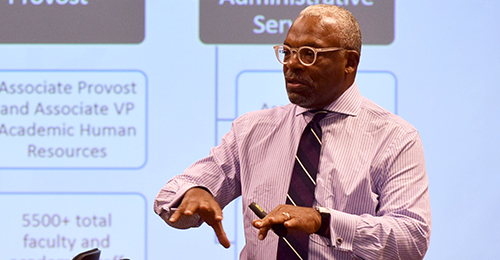 For the last 13 years, Theodore H. (Terry) Curry has served the Michigan State University community as associate provost and associate vice president for Academic Human Resources. In this role, Terry has been a close partner of the Academic Advancement Network (formally Faculty and Organizational Development), providing expertise and leadership for faculty and academic staff across the University.  An engaging presenter, Terry’s workshops are known for quality content with a touch of humor.

As MSU’s liaison to the Big Ten Academic Alliance Academic Leadership Program (ALP), Terry has been vital in shaping the learning experience for all fellows across the Big Ten. MSU’s ALP fellows have benefitted from this leadership, and also gained direct access to his insights as an administrator.  A steady and caring leader, Terry always finds a way to connect with people as individuals and looks for ways to further their development as professionals. The following tributes from individuals across MSU only begin to show Terry’s impact as a leader, educator, mentor, and friend.

Terry, you are a kind and generous mentor; I am so grateful you have been a part of my professional journey.  We met when I joined the Women’s Advisory Committee to the Provost about ten years ago.  You made me feel welcome and I always enjoyed the opportunity to talk with you about restaurants, golf, travel, and family.  Over the course of my career, you have freely shared your wisdom and friendship and I have benefitted from your support.

While someone else will serve in your position, no one can take your place.  Certainly, we will all miss your knowledge and expertise but what we – I – will miss so much more is your graceful yet commanding leadership presence.  You have earned the respect of faculty, staff, and students because you exude calm, cool, grace, empathy, and gravitas.  You are a forthright and transparent communicator.  You exemplify the best of leadership.  Thank you for all the ways in which you have made MSU a better place.  Thank you for making me a better leader.  Wishing you all good things in the next chapter of your journey.

Melanie B. Jacobs
Interim Dean and Professor of Law, MSU College of Law

When you work in a place with 75,000 students, faculty, staff and advisors, it is easy to feel anonymous. Years before I began exploring academic leadership, I remember being in large group meetings and Terry Curry saying hello to me by name. As a professor who works hard to learn all of her students’ names – a process that still requires me about two weeks – and as just one of the large community that calls Michigan State their professional home, I was immediately struck by the fact that Terry Curry knew my name. This small act made me feel seen and valued. During my eleven years at this institution, I have often seen Terry in workshops, meetings, walking from building to building. He always has a smile and kind greeting, even when I can only assume that underneath his calm exterior his feet are swimming fast! Few individuals on this campus have had a more positive impact on emerging academic leaders than Terry Curry. As I look back at how Terry impacted my own professional trajectory, however, I am not drawn to the workshops and training sessions, but rather I think of how he always knew my name. He always saw me and my work. For that, I will always be grateful. Thank you, Terry. 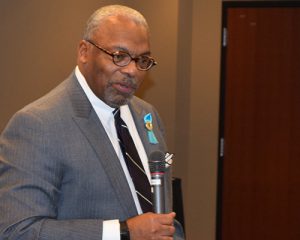 Beginning with the ALP class of 2009-10, I have had the great pleasure to get to know you both professionally and personally. While I know that all good things inevitably come to an end, one wishes that some never do. Alas, your retirement is one of those in the latter category. You have meant so much to MSU and especially to all of us in leadership roles that it is virtually impossible to imagine anyone ever replacing you. Your thoughtful perspective, calm demeanor, and keen insights into the complexity of HR issues made me always feel at ease that I could rely on your counsel to do the right thing. You also always made us think of the big picture and the larger institutional wellbeing when making decisions. For these and many other reasons, you leave behind an indelible imprint on this institution.

On a personal level, please accept a very sincere and heartfelt thank you for your support and friendship! You will be greatly missed but never forgotten!! Go Green!!!

It is not an exaggeration to say that Terry helped define the course of my career. We first interacted in 2010. I was sitting in my office when Terry called to let me know that I had received a university award. At the time, I certainly did not understand how big a deal it was to get a call from Terry. Later that year, I was named a Lilly Fellow. During my first Lilly event, Terry reintroduced himself, knowing my name and congratulating me again. It was clear how important the Lilly Fellows were to him. We were/are his “ninjas,” his stealth agents of change. At that same time, my tenure package was being reviewed, and Terry told us that he reviewed every case. Every time Terry came to our of our Lilly meetings, I knew he was going to pull me aside and tell me the bad news…Thankfully, when he did pull me aside, he had good news. Terry was central to three of the most important events of my early career, and I can say with confidence that, without Terry, I might not be here today. I am sure I am only one of many who can say that.

Terry Curry represents the very pinnacle of being a Spartan. He has seen us at our very best. He has seen us at our worst. Every time that Terry led the discussion for choosing new distinctions for faculty and students or during the reappointment, promotion and tenure process, I saw a man who exemplified even treatment for all. I first “met” Terry when he called me as an Assistant Professor to notify me that I was chosen as a Teacher-Scholar. At that time, I thought of him as “the award guy.” Later, as an administrator, I learned that Terry also counseled administrators when employees went astray. He is even-handed, fair and willing to offer suggestions that consider all sides of an issue. I know the joy that Terry gets from making that contact to faculty and students on awards; I know the sorrow he feels when one of us goes astray. We will miss Terry’s steady hand. We will also miss his impeccable dress. The overall style for men’s clothing on campus will halve the day he retires. Terry Curry can be summarized in one word: Gentleman.

I am going to start with the simple fact that Terry Curry will simply be missed! I met Terry through his role as facilitator, guide and educator in the Department Executive Officer Program and Academic Leadership Program. I learned from Terry, and these programs, many of the critical skills I employ as a leader. Looking back on it, it is absolutely clear that Terry viewed his role in ALP and DEO as an educator first, having infinite patience in helping people understand important issues around all aspects of higher education and our institution. I never met anyone who could compartmentalize as well as Terry. The world could be burning down, and when it was his time with you, none of that came into the issue we were discussing. Terry as a leader is someone you could turn to with a problem and lean on for support. He clearly understood that in many situations, leading is about facilitating others, and in his role, he put that into action. He clearly took great joy in helping us grow as leaders and helping us navigate solving the issues we encountered. My life was made better through getting to know this patient, compassionate, golf-loving, individual who helped me become a better version of myself. Thank you, Terry.

It has been a privilege to know Terry. I’ve worked with him on standard day-to-day Academic Human Resources tasks, but also as a Big Ten Academic Alliance Program (ALP) fellow.

Terry is no doubt well-respected all over campus, but I am honored to be able to share the personal respect and admiration that I have for him. He exemplifies integrity, professionalism, consistency, compassion and a strong work ethic. I’m personally moved by his support for junior or mid-career administrators, faculty, and staff and that he has always been willing to provide mentoring whether formal or informal. Terry has a wealth of knowledge, wisdom and, resources, and has made my experiences and responsibilities much easier to navigate. He is approachable and always creates a safe space for leading, learning and consulting.

I thank him for his leadership and the multitude of support that he has given to this university and to many of us personally. As he departs, I hope he trusts that his impact has been felt and that his contributions are much appreciated. Cheers to a well-deserved retirement and more time on the golf course!

It is impossible to put into words everything that Terry has brought to MSU and the faculty with whom he has interacted over the years. He has been a mentor to countless faculty, offered insight and wisdom, led and moderated multiple leadership development workshops, and provided timely and beneficial advice. He has always made himself available to those who seek his input, but he has also been careful not to impose himself on others. He sees opportunities and creative solutions in places where many others only see problems. The list goes on and on. For me personally, Terry has been especially impactful due to his mentorship to the MSU fellows of the Big Ten Academic Leadership Program. The way he has structured and administered the MSU program has made it a model that other Big Ten universities seek to emulate but can never fully replicate, and the individual mentoring he provides the fellows is invaluable. I thank Terry for everything he has done over the years, and I wish him the best of luck during his upcoming retirement. He will be greatly missed.

The rest of the country has “Six Degrees of Kevin Bacon.” I suggest that we at MSU have “Two Degrees of Terry Curry.” I began to formulate this hypothesis several years back when I was participating in an AAN event where we were asked to conduct a no-tech network analysis of our own connections on campus. It quickly became apparent that even though I was only a recently tenured professor, Terry was a major node in my network—but this isn’t about me. Authentically connecting with people, connecting them with one another, and helping them open doors to new opportunities, are all just part of who Terry is. To say that these things come naturally to him does not mean they are unimportant—to the contrary. These actions help build an institution’s capacity for equity, growth, innovation, and change, and their cumulative impact is beyond measure. Take that, Kevin Bacon.